11 Futuristic Aircraft. A review of some aircraft of the future 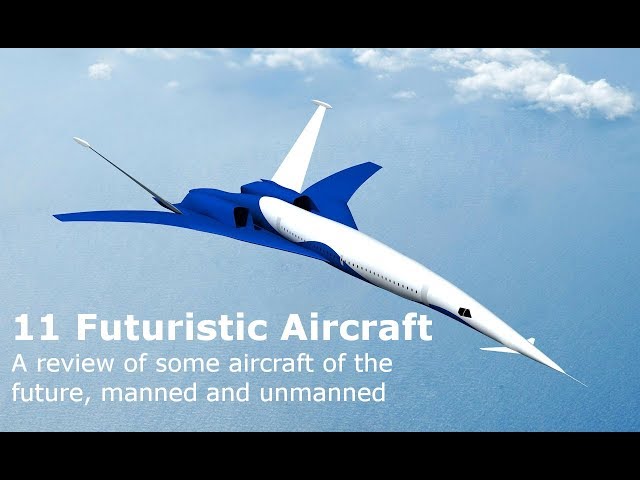 In this video I to briefly describe 11 of the most interesting and innovative aircraft of the future, manned and unmanned.

With the rapid development of aero engines, airframe structures, and software we can look forward to many new aircraft in our skies in the years ahead.

Many will be quieter with much lower carbon footprints. Some are designed for speed, reducing the time taken to fly between continents.

Others are being planned to alleviate the congestion on our roads by carrying passengers between and within cities.

So let’s look at our eleven examples.

1) Washington based Zunum Aero has been working on designs for a family of 10 to 50 seat mid range hybrid electric aircraft. The aptly named Zunum (Mayan for hummingbird) is backed by JetBlue Technology and Boeing HorizonX. The company was formed in 2013 and plans to have a prototype flying by 2019.

2) The German company Volocopter have built and flown their first electrically powered VTOL air taxi and carried their first passenger. They are now continuing their research and development with the Volocopter 2X multicopter. After several successful flights and positive receptions at exhibitions Volocopter hope to start training commercial pilots by 2020.

3) Boom Technology’s supersonic jet is designed to fly at Mach 2.2. The design resembles the much missed Concorde and it is envisaged that once again passengers would be able to cross the Atlantic in half the time of today’s airliners. The cost would be equivalent to current Business Class seats. The project is being backed by the Virgin Group and Japanese Airlines and the first commercial flights are planned for 2023.

4) 2023 could be also the year that sees the first test flights of Lockheed Martin’s new business jet. The Aerion AS2 is designed for business passengers and will have room for 12 traveling at Mach 1.4 over water and 1.2 over land. At such speeds the flight time across the Atlantic could be cut by three hours and the Pacific by five. Lockheed are well known for the development of fighter jets and the Aerion AS2’s engine will be based on the one that powers the F-16.

5) The continuing development of aero engines is resulting in all kinds of advantages. Critics of aviation often point at the level of noise pollution but over the decades aircraft have become quieter and quieter. This trend looks set to continue with Spike Aerospace’s ambition to create the “world’s quietest supersonic jet”. Their design should soften the sonic boom of the jet passing overhead at Mach 1.6.

6) Boeing are working on an unmanned hypersonic surveillance aircraft or spy plane capable of flying at up to Mach 5. No aerospace company has yet designed and produced a successor to the SR-71 Blackbird but this could be it. This aircraft has been dubbed the ‘Son of Blackbird’ and will fly at speeds up to 3,836mph (6,174kmh).

7) Airbus are also developing new aircraft. One of these is the Airbus Vahana, named after aerial chariot of the Gods in Hindu mythology. This was the first of Airbus Group’s ‘A-cubed’ projects. It’s a self-piloted eVTOL aircraft designed to carry cargo or a single passenger. The prototype made its first flight at Pendleton, Oregon on January 31st 2018.

8) Another Airbus project is the CityAirBus. This is also an eVTOL aircraft and its larger size is designed for transporting passengers around congested cities. It’s an air taxi concept that will carry four passengers and the pilot at speeds of up to 75mph. Imagine hailing one of these taxis to cross London or New York!

Have you noticed others that should be on this list? Add a comment below with your ideas.