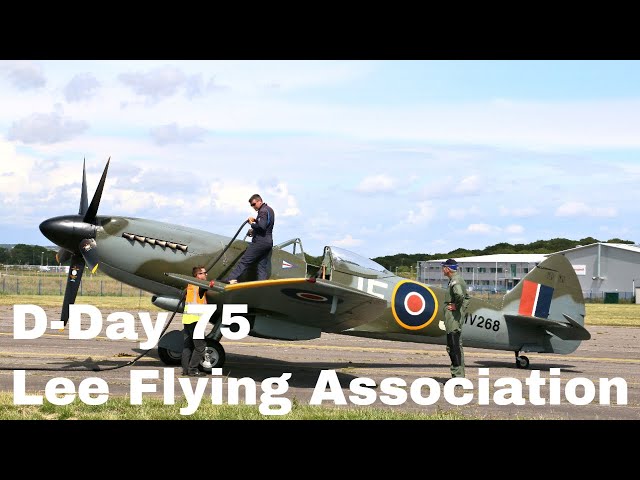 In this video I explain the role played by the Lee Flying Association in the D-Day 75 celebrations held at Solent Airport on the weekend of June 8th and 9th 2019.

From the outset the Lee Flying Association members were keen to participate in the organisation of this special event.

The LFA had been instrumental in the success of the 70th anniversary of D-Day in 2014, so they offered their services to Fareham Borough Council, the organisers of the 2019 event.

Solent Airport, formerly HMS Daedalus, was a hive of activity during the preparations for Operation Overlord.

It was the most active airfield on the south coast with well over 400 aircraft movements on D-Day itself.

With 10 Squadrons based at the airfield its runways launched Spitfires, Seafires, Mustangs, and Typhoons, flown by pilots from the Fleet Air Arm, the Royal Air Force, the Royal Canadian Air Force, and the US Navy.

At Duxford the Paras boarded Dakota aircraft which transported them over the Channel to take part in the Daks Over Normandy event.

Meanwhile, on the following weekend, the LFA ran a stall at the Solent Airport event.

The LFA stall proved very popular, and many people were informed of the LFA and the work it has done and continues to do for the airfield.

Just as in 1944, weather played a crucial part in the proceedings.

The strong winds of Saturday 8th June meant that many of the planned air displays had to be cancelled.

However, a flying display by a gyrocopter pilot demonstrated the resilience and maneuverability of these aircraft.

And later on the Saturday there were further displays by two vintage Army helicopters.

Earlier, the Red Arrows took time out of their busy schedule to fly past the airfield, leaving red, white, and blue trails.

On the Sunday the weather was much better so the entire schedule of flying displays was completed, which included the Great War Display Team.

So all in all it was another successful commemoration of the events of early June 1944 and the Lee Flying Association members were very glad to have taken part.

Lee Flying Association (LFA) is a not-for-profit members organisation that works to ensure the retention of Solent Airport for public aviation and community uses.

And you can be part of this association and enjoy the many benefits of membership.

Whether you’re a pilot, aircraft owner, or someone who is just interested in aviation or even just the history of the airfield you are welcome to join the LFA.

You can find out more and apply for your membership at the LFA website:
http://www.eghf.co.uk

Or simply email the Chairman at membership@eghf.co.uk

Join the LFA and be part of the ongoing aviation success story at Solent Airport.

Acknowledgements:
This presentation contains images that were used under a Creative Commons License. Click here to see the full list of images & attributions: https://app.contentsamurai.com/cc/333386