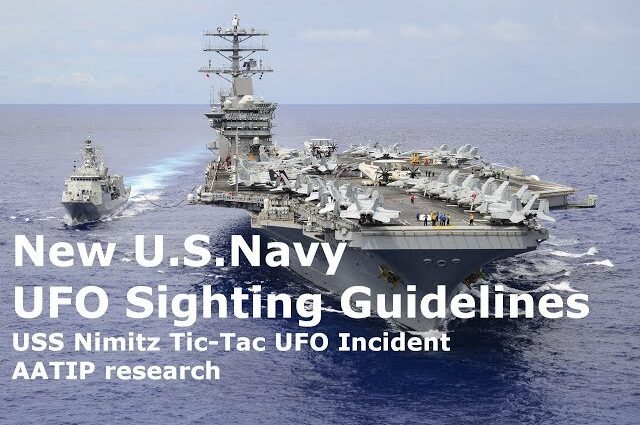 In this video I summarise some startling recent developments in the field of UFO research.  You’ve probably seen mentions in the press of the news that the U.S. Navy is redefining how personnel should report UFO sightings.

The story can be traced to an article published on the US news website POLITICO (politico.com).

The article, written by Bryan Bender and published on the 23rd April (see link below), stated that the U.S. Navy is drafting new guidelines for the reporting of UFOs.

It goes on to explain that the rationale for this move is to properly investigate and destigmatize such sightings.

Not so long ago, if you were in the military and if you reported seeing a UFO you could expect to be suspended from duties pending an investigation into your state of mind.

Pilots, both military and civilian, know only too well that putting it on the record that they’ve seen a UFO is enough to halt and even end your career in aviation.

Since World War II far too many pilots (and other professionals) have had to endure the ridicule and denial that have been the two main suppressors of any open discussion about UFO sightings.

Consequently, many sightings have not been fully investigated due to the reluctance of key witnesses to step forward to give their accounts.

However, recent sightings and the recording of UFOs being tracked by military pilots, has once again brought UFOs into centre stage.

In December 2017, POLITICO published another article, again by Bryan Bender, which told of how in 2009 the Pentagon had set up a department with a multi million dollar budget to investigate UFOs.

This department, the Advanced Aviation Threat Identification Program (AATIP), was tasked with investigating the sightings by military personnel of unidentified aerial objects which not only flew at incredible speeds but which also occasionally seemed to defy the laws of physics.

One of these airspace incursions occurred in 2004 when a UFO (or UAP, if you prefer) was tracked for several days as it maneuvered around the USS Nimitz Carrier Strike Group, then on maneuvers off the east coast of California.

Acknowledgements:
This presentation contains images that were used under a Creative Commons License. Click here to see the full list of images & attributions: https://app.contentsamurai.com/cc/297597