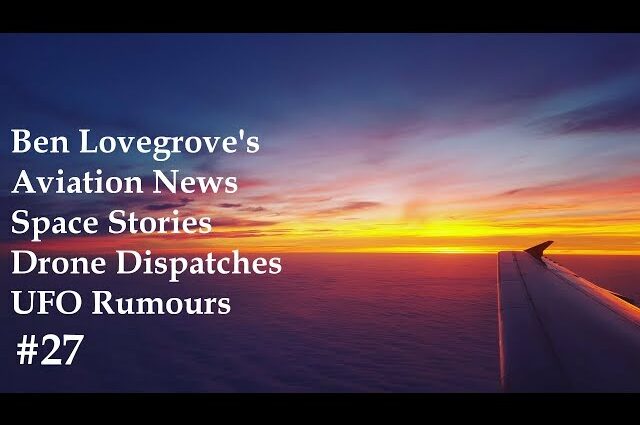 My recommended books, products, and equipment: https://www.amazon.co.uk/shop/benlovegrove
Would you like to sponsor more videos like this? Please visit: https://www.patreon.com/redspan
Did you enjoy this video? Please consider leaving a tip: https://paypal.me/redspan

1. The RAF Tornado Farewell Tour of the UK.
2. Airbus to cease production of the A380.
3. NASA’s ambitions for returning to the Moon.
4. UK Leading the Way in Drone Pilot Standardisation.

1. RAF Tornados will be conducting a farewell tour of the UK on February 19th, 20th and 21st. This aircraft has been in service for over forty years and will be missed by the many pilots, engineers, and technicians who have contributed to its success as a multi-role aircraft.

The Panavia Tornado was a joint development by Italy, the United Kingdom, and what was then West Germany.

It first flew in 1974 and entered service a few years later.

It was used extensively throughout the Gulf War of 1991 as well as during the wars in Bosnian, Kosovo, Libya, Afghanistan, and Syria.

There are about twenty Tornados on display in museums around the UK. It’s one thing to see them in the media but nothing compares to seeing this aircraft up close in order to appreciate its size and engineering.

The farewell tour will consist of three flights, passing overhead military bases and aircraft factories in England, Scotland, and Wales.

The flypasts will take place on the afternoon of 19th and 20th February and on the morning of 21st February. Exact timings are due to be released today, the 18th February, on Twitter and Facebook. Suggest you check the @StnCdrRAFMarham account on Twitter.

The Tornado is being replaced by the new F-35 Lightning II stealth fighters and the existing but upgraded Typhoon fleet.

2. Airbus have announced that they are to cease production of the A380 due to a fall in orders. They came to this painful decision when it became clear that the market has changed and that airlines were switching to smaller, twin-engined airliners.

It must be a big disappointment to all the designers, engineers, and other staff who contributed to the launch of this huge passenger aircraft.

However, we will still see the A380 in our skies for many more years yet. There are still some orders to complete so, along with those already in service, it will be long time before they are all retired.

Emirates have been the A380s biggest buyers with a fleet of over 100. Another twelve airlines including British Airways and Singapore Airlines have bought a total of over 120.

But while this aircraft has been popular with passengers the airlines were less keen citing high running costs.

In the end, the decision by Emirates to switch to smaller aircraft forced Airbus in this difficult position.

For details and prices visit: https://goo.gl/22u4R6

This presentation contains images that were used under a Creative Commons License. Click here to see the full list of images and attributions: https://app.contentsamurai.com/cc/255239

As an Amazon Associate, DJI, and iTunes affiliate I earn a small commission from qualifying purchases. If you click through a link I share I may earn some commission from the sale. It doesn’t affect the price you pay.

2021-06-11
Previous Post: ZeroPoint Aviation Z-1 Headset Flight Test Affordable Pilot Headset
Next Post: Can I Travel To Amber List Countries? Yes you can! Here’s how to do it