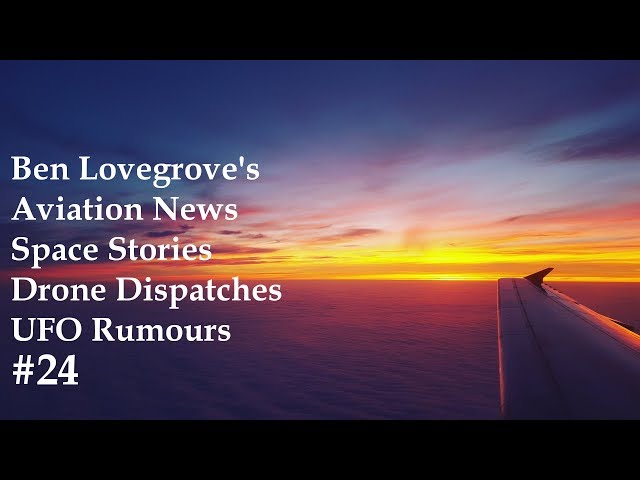 2. Seeing the stars could become even harder for some.

3. Are drones the new UFOs?

1. Ron Carlson was ferrying his lovingly restored 1945 Grumman TBM Avenger from Phoenix to Chicago when he and his backseat passenger Ken Franzese had to bail out over the White Mountains of northeastern Arizona.

They were over the most mountainous part of their journey, flying level at 12,000 feet when there was a loud bang and smoke started to flow out of the engine cowling.

Ron, who has 15 years experience as a bush pilot, was unable to locate any suitable terrain for a forced landing.

With the airspeed decreasing and losing height he and his passenger were quickly running out of options and they agreed to bail out.

Both men were rescued but the whereabouts of the aircraft remains a mystery.

So last year Ron took out a full page advertisement in The Independent, a local newspaper in White River, Arizona.

The ad offered $20,000 for anyone who could provide him with the location of the aircraft – and the reward remains unclaimed.

With the winter’s snow covering the area at the moment, the hope is that the spring thaw will finally reveal the remains of the aircraft.

Let’s hope that in the spring of 2019 Ron will be reunited with his beloved TBM Avenger.

To read Ron’s description of the flight and the bail out visit tbmavenger.blogspot.com.

2. Those of us who live in urban areas are familiar with the light pollution that prevents us from gazing in awe and wonder at the night sky.

You have to go far into the countryside to escape most of the light pollution from towns and cities.

And you have to go into the desert or wilderness to see the night sky as our ancestors once did.

So pressure groups who campaign for a reduction in light pollution are not best pleased with the idea of putting billboards in space.

They would be built using small satellites called Cubesats and positioned about 280 miles up.

The reaction from astronomers and others has been overwhelmingly negative.

However, given the fact that most people live in light polluted cities and don’t bother to look at constellations anyway one wonders if this idea would be met with some enthusiasm after all.

3. An article published on WeTalkUAV on January 18th asks the question, “Are drones the new UFOs?”.

The article links to another published two days earlier on Slate, entitled “Drones Are the New Flying Saucers.”

It’s a good question and I’m sure a lot of UFO sightings can be explained by the use of drones flying at low altitude.

I asked the same questions a year ago in my video, “Drones And UFOs – Why Some (But Not All) UFO Sightings Can Be Explained By Unmanned Aviation”. UAV probably do account for some UFO sightings, often accidentally but also sometimes deliberately.

It’s possible to identify astronomical phenomena and aircraft, but it’s less easy to rule out slow moving lights above the tree line.

So a lot of that shaky footage you see uploaded to UFO groups could be a new stealth aircraft, an alien scout ship, or a drone.

4. This year Singapore Airlines is celebrating 60 years of flying to Hong Kong.

If you know your airline history you’ll quickly point out that Singapore Airlines was launched in 1972, so only 46 years ago.

Prior to that it was Malayan Airways and in 1958 it started flying a 55 seat Douglas DC-4 Skymaster to Hong Kong twice a week.

Malayan Airways became Malaysia Airways in 1963 and the following year it was renamed again – Malaysia-Singapore Airlines, when Singapore split from Malaysia.

From the Douglas DC-4 Skymaster to the Airbus A380 – things have changed a lot in the past 60 years.