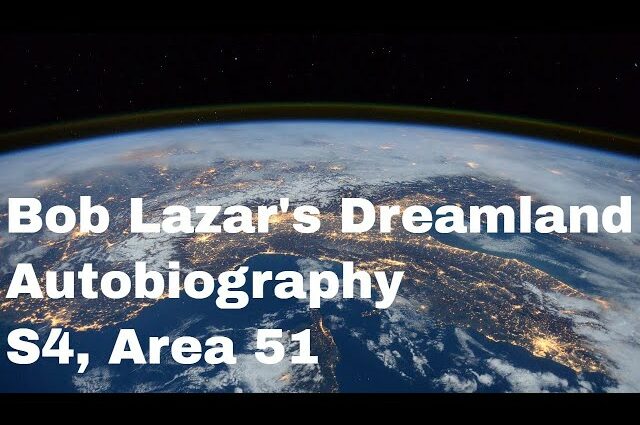 In this video I review Bob Lazar’s autobiography, Dreamland.

For those who are already familiar with the Bob Lazar he needs no introduction but for the benefit of those who have never heard of him here’s a quick sixty-second summary.

Bob Lazar first came to the world’s attention in 1989 when he stepped forward to tell his story about how he had been recruited to work in the highly secretive S4 facility in Area 51 in Nevada.

The interviews were conducted by George Knapp of KLAS TV.

He told how he had been employed to help in the attempts to reverse engineer the propulsion system of an extraterrestrial craft. He also explained how he had been given access to the craft, had witnessed test flights, and had seen a total of eight flying saucers in hangars.

His seemingly incredible story may have ended there and he may have faded back into obscurity in the subsequent years, but thirty years later he was persuaded by the filmmaker Jeremy Kenyon Lockyer Corbell to repeat his story to a new generation.

The Corbell film Bob Lazar: Area 51 & Flying Saucers was released in 2018 and included interviews with both Lazar and George Knapp.

A year or so later Bob Lazar has published an autobiography in which he goes into much more detail about his background and his work at S4.

We learn about the relationship between him and his handler, Dennis, and his co-worker in the lab, Barry.

We learn about the stifling atmosphere in S4, how employees were forbidden to associate with each other, how all chat was strictly controlled, and how each group of researchers were segregated from each other, and therefore unable to share information in a way that would help speed up progress on the project.

He was subjected to lengthy, intrusive, and intimidating surveillance while his Majestic security clearance was considered. We also learn why he decided to break cover and tell his story and it’s easy to understand his reasons.

I can’t help but wonder if his US Government employers had shown some humility, humanity, and humour he might still be working at S4 and we would never have heard of Bob Lazar.

At first, it wasn’t an altruistic motive that drove him to tell his closest friends about his work.
Instead, it was an act of self-preservation. He had to tell someone because he was living with the intense mental pressure created by the way his handlers were treating him.

If his employers had shown him just a little of the employee care that we’ve come to expect in the 21st Century they may have kept Lazar as an employee and maintained the secrecy.

The book continues with descriptions of how he and his then wife Tracey, a friend calle Gene, and John Lear, son of William Lear, inventor of the Lear Jet, went out to the Area 51 perimeter to watch test flights of the craft.

Acknowledgements:
This presentation contains images that were used under a Creative Commons License. Click here to see the full list of images & attributions: https://app.contentsamurai.com/cc/xxxxxx