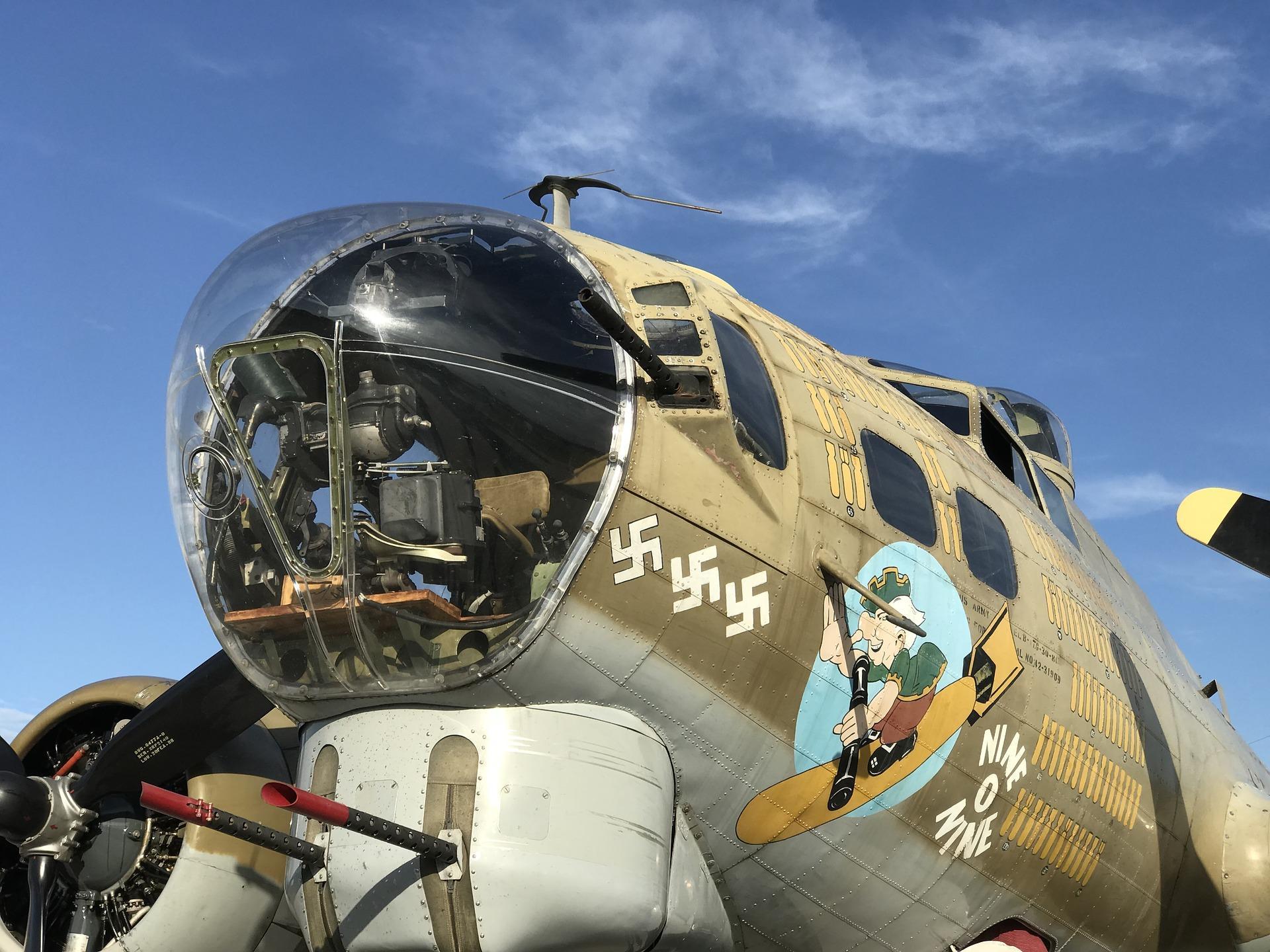 Look carefully at the B-17 and note how shot up it is – one engine dead, tail, horizontal stabilizer and nose shot up. It was ready to fall out of the sky. (This is a painting done by an artist from the description of both pilots many years later.) Then realize that there is a German ME-109 fighter flying next to it. Now read the story below. I think you’ll be surprised…..

Charlie Brown was a B-17 Flying Fortress pilot with the 379th Bomber Group at Kimbolton, England. His B-17 was called ‘Ye Old Pub’ and was in a terrible state, having been hit by flak and fighters. The compass was damaged and they were flying deeper over enemy territory instead of heading home to Kimbolton.

After flying the B-17 over an enemy airfield, a German pilot named Franz Steigler was ordered to take off and shoot down the B-17. When he got near the B-17, he could not believe his eyes. In his words, he ‘had never seen a plane in such a bad state’. The tail and rear section was severely damaged, and the tail gunner wounded. The top gunner was all over the top of the fuselage. The nose was smashed and there were holes everywhere.

Despite having ammunition, Franz flew to the side of the B-17 and looked at Charlie Brown, the pilot. Brown was scared and struggling to control his damaged and blood-stained plane.

Aware that they had no idea where they were going, Franz waved at Charlie to turn 180 degrees. Franz escorted and guided the stricken plane to, and slightly over, the North Sea towards England. He then saluted Charlie Brown and turned away, back to Europe. When Franz landed he told the CO that the plane had been shot down over the sea, and never told the truth to anybody. Charlie Brown and the remains of his crew told all at their briefing, but were ordered never to talk about it.

More than 40 years later, Charlie Brown wanted to find the Luftwaffe pilot who saved the crew. After years of research, Franz was found. He had never talked about the incident, not even at post-war reunions.

They met in the USA at a 379th Bomber Group reunion, together with 25 people who are alive now – all because Franz never fired his guns that day.

When asked why he didn’t shoot them down Stigler later said,

“I didn’t have the heart to finish those brave men. I flew beside them for a long time. They were trying desperately to get home and I was going to let them do that. I could not have shot at them. It would have been the same as shooting at a man in a parachute”.