Watch Video: “Here’s to the crazy ones and the trouble-makers – the round pegs in the square holes!” 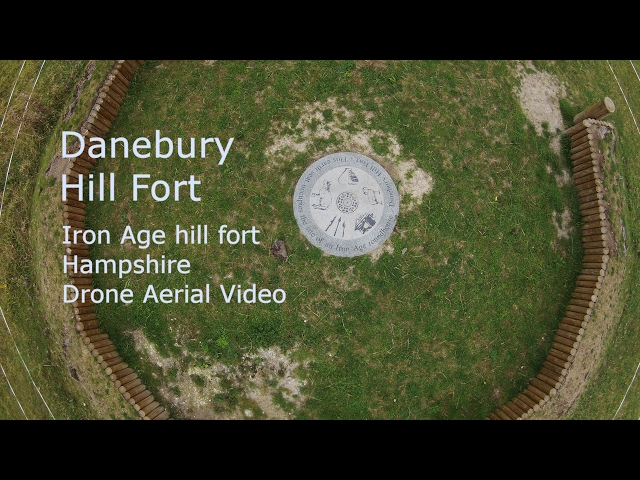 Danebury is a well known landmark for many people in Hampshire, particularly to anyone from Stockbridge, Middle Wallop, and Winchester.

This popular site is frequented by visitors, historians, archaeologists, dog walkers and anyone else keen to enjoy a walk on one of the most ancient of sites in Wessex.

Danebury Rings as it sometimes called, is about 12 miles north west of Winchester, the ancient capital of Wessex and England. There is a small car park and toilets at the foot of the hill. From there a short walk will bring you up to the main eastern entrance.

Once you arrive at the entrance you can walk around the outside, along the entire circumference on top of the ramparts, or just able through the inside of the twelve acre site.

This Iron Age hill fort dates back to the 6th Century BC and it was built in about the same time as several others in the Wessex region. Nearby you will find Figsbury Ring, Quarley Hill, and Bury Hill – all of which are hill forts dating from the same era.

Of course, it was developed over time. It began as a much simpler enclosure and was gradually improved and enhanced, just like many other sites of this type.

As well as a defensive structure to protect the occupants from raids, the site would also have been used as place to store grain and other crops and produce from the local farmland.

It was also a place of burial. There was archaeological evidence of the remains of over 100 bodies in a charnel pit.

By the time of the Roman occupation the site had probably already been abandoned.

At its height of occupancy there would have been about 300-400 people living at the site. Religion played an important part in their lives and they would have placed offerings and sacrifices to the gods and spirits that inhabited the land, woods, rivers, and sky.

Danebury is quite close to Middle Wallop airfield, home of the Army Air Corps. You may notice that there are several tall lamp posts on the site. These are there to provide warning lights to low flying helicopters who may be arriving at or departing from Middle Wallop.

Consequently, for anyone interested in aviation Danebury can be a convenient location during any events held at the army airfield. I visited in the 1990s and watched the Avro Vulcan XH558 fly past at low level while standing on the ramparts. It was a site that was truly awe inspiring.

There would have been a hierarchy among the population, with a social elite presiding over the ceremonies, planning, and building.

The atmosphere at this ancient pagan site is peaceful and timeless. Without the interruption of other walkers or low flying aircraft it is just possible to imagine the past coming to life. In some ways it has never stopped and is always present. We just need to silence the distractions to reveal it. As the skylarks sing and the wind moves the branches of the many trees around the earthworks you could be present in any day during the past two thousand years.