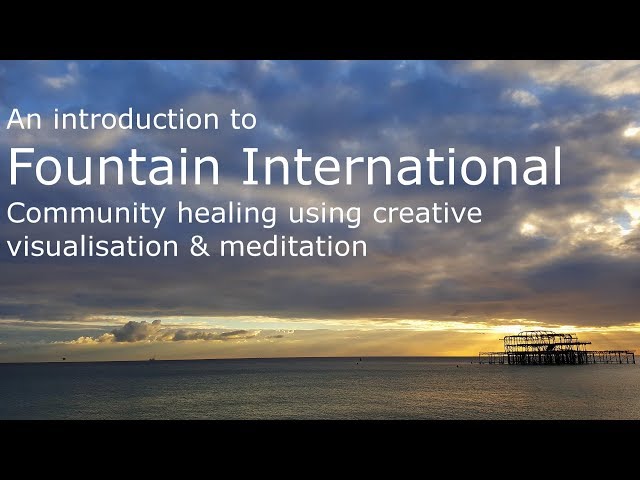 Before I describe the origins and purpose of Fountain International I would urge you to bear in mind the following.

There are many possibilities and a great deal of potential being generated by recent and ongoing discoveries in astrophysics, quantum theory, and other scientific disciplines.

Some of these concepts are even more amazing than many of those wild ideas suggested by the New Agers of the 20th Century.

Max Planck, the originator of modern quantum theories and winner of the Nobel Prize in Physics in 1918, once said:

“As a man who has devoted his whole life to the most clearheaded science, to the study of matter, I can tell you as a result of my research about the atoms this much: There is no matter as such!”

“All matter originates and exists only by virtue of a force which brings the particles of an atom to vibration and holds this most minute solar system of the atom together. . . .” We must assume behind this force the existence of a conscious and intelligent Spirit. This Spirit is the matrix of all matter.”

The more we understand about what little we can see of the Universe, the more it seems that some of mystics and sages of the past were on to something.

It’s as if Ancient Wisdom is a treasure trove of clues and nuggets that are being revealed as valid by scientific discoveries.

What was once considered metaphysical becomes part of the accepted laws of physics and astrophysics.

We seem to have reached a time during which the frontiers of science are being pushed back to such an extent that the often derided shamans, magicians, and mystics of yesteryear are seen in a new light.

So with that in mind let’s consider what concentrated thought and intent can do to help local communities and by extension the Universal Network (the matrix of matter that Planck referred to) on which the entire Cosmos is based.

In 1981 the researcher, dowser, and author Colin Bloy conceived the idea that communities, like people, can suffer from dis-ease and be healed.

He proposed that people use a simple meditation to harness the power of unconditional love and intention to bring healing to their local communities.

Think of it as an act of creative visualisation in which the chosen focal point receives an energy boost of pure and unconditional love energy direct from the Divine Source.

The first Fountain group was formed in Brighton in West Sussex in 1981 using as its focal point or Hara a beautiful fountain in the centre of the town.

Hara is a Oriental term that refers to the centre of the etheric or chi body. It is a portal that is surrounded by an envelope of energy called the ‘tan tien’,

You may be familiar with these terms if you practice any Tai Chi or Chi Kung.

The fountain, in the Old Steine, is a well known landmark and is positioned on the town’s main ley line.

The Old Steine is so named because it commemorates the stone circle that once stood on this spot. The ancient megaliths that once made up the circle now form the foundations of the fountain.

Perhaps, like so many other stone circles and solitary megaliths, the Old Steine’s foundation stones marked a node point on a global energy grid.

The first Fountain group took a note of the social conditions within Brighton before commencing and then set to work.

The effects were startling: dramatic reductions in crime rates and an increase in people’s sense of well being were recorded by residents and visitors alike.

Just like the Maharishi Effect, it only takes a small minority of people meditating regularly for the entire community to benefit.

The Fountain technique of community and planetary healing has spread around the world.

Fountain International is dedicated to promoting world peace through this proven technique of meditation. It can be done alone or in a group.

Fountain is open to everyone, of whatever faith, colour, nationality or political persuasion. There is no membership or organisation in the usual sense, and all the individuals or groups throughout the world work independently in the manner best suited to their own communities.

To find out more about Fountain International and to subscribe to the newsletter visit their website: http://www.fountaininternationalmagazine.com.

2019-01-11
Previous Post: Drones And UFOs. Why Some (But Not All) UFO Sightings Can Be Explained By Unmanned Aviation.
Next Post: Promoting Businesses Using Video. Small Business Marketing. Aviation Marketing