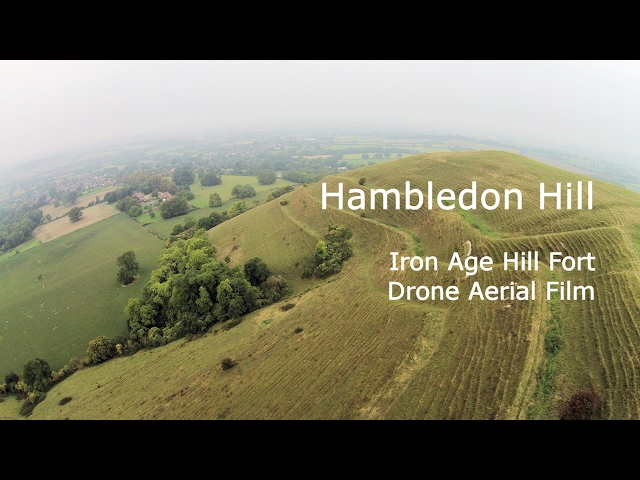 Set your satnav for the village of Child Okeford, a village on the hill’s western side. There is a shop and a pub (The Baker’s Arms) there if you need to refresh yourself after your walk.

When I visited it I approached from the lay-by to the north. There is a footpath covered in tree roots leading up to the foot of the ramparts, then a steep climb if you take the direct route to the summit. Otherwise you can skirt along the sides to find gentler slopes.

Archaeological evidence suggests that the site was occupied in Neolithic times. You can imagine it as a place of security and refuge above the wild and riskier places in the valleys below which would have been covered in ancient woodland at the time. With the arrival of the Bronze Age a lot of the woods would have been cleared for farming.

Archaeologist have discovered many finds at the site. They have uncovered the red deer antler picks which would have been used to create the ramparts and other earthworks. They have also dug up human skulls and even a skeleton of a young man with an arrow head embedded in him. Presumably this unfortunate person probably died while attacking or defending the site.

Such hill forts were places of prestige and power in the local area. The presence of two long barrows suggests a place of veneration and remembrance of the ancestors. Who knows what rituals and ceremonies took place on its summit, silhouetted against the night sky.

The fort was a centre of power for Durotriges tribe who ruled over this area in ancient Britain. They built a string of forts that included Hod Hill, Hengistbury Head, and the magnificent Maiden Castle which is just south of Dorchester.

The site was also a meeting point for rebels during the English Civil War.

This hill fort is well worth a visit for the views alone so pick a day with reasonably good visibility. It doesn’t need to be the height of summer, just any day when the air is clear. In fact, winter is often better when there is less dust, particularly later in the farming season when the crops are harvested from the fields in the valleys below. You can see for miles from the summit.

You can also walk up from a small car park on the south west side. Look out of the narrow entrance to the lane in Duck Street. It’s just next to a pair of cottages.

Three entrances to the hill fort have been identified. The third is on the south east side. Despite its obvious advantages the hill fort was abandoned in favour of another in the vicinity in about 300 BC.

Hambledon Hill is also a nature reserve managed by the National Trust, so if you’re a bird watcher or keen on any aspect of the local flora and fauna then this site should be on your itinerary.

Due to its location and the views it’s popular with joggers who want to test their stamina on the slopes.