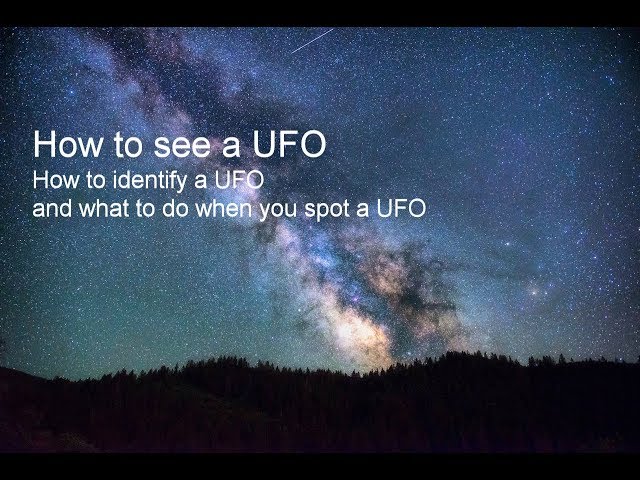 Follow these tips on how to see a UFO. how to identify a UFO, and what to do when you spot a UFO.

This is a controversial subject and the internet is awash with hoaxes and natural phenomena dressed up to be something out of the ordinary.

The easy availability of sophisticated video software and the numerous types of terrestrial aircraft (manned and unmanned) has resulted in countless false interpretations and deliberate hoaxes.

The most common reaction to anyone who says they’ve seen a UFO is ridicule and there is no shortage of mischievous people willing to lay a trap to snare the unwary or the uninformed.

Like internet trolls they then delight in watching the reaction to their hoaxes and trivia, leading the gullible astray.

So the first skill that you need to develop if you want to become a genuine UFO hunter is the ability to confidently identify and rule out natural and man-made phenomena.

In this video I’m going to suggest several ways you can do this and the tools that make the task easier.

Aircraft are easily identified by their navigation lights. A typical light aircraft will have the following lights fitted:

A red port light on the left hand wingtip.

A green starboard light on the right hand wingtip.

A white light shining rearward on the tail.

And a red rotating beacon on the top of the fin.

At night or in poor visibility during the day the aircraft may also have white strobe lights on each wingtip.

And when coming in to land when taking off the aircraft may also have a white light shining forward.

So it’s obviously important to take into account the location and the trajectory of the lights in the sky that may be light aircraft, helicopters, gyrocopters, or perhaps military aircraft flying at low level.

And it’s not just powered aircraft that may cause UFO sightings. In 2017 a glider with fireworks attached to each wingtip gave low level aerobatic display. Seen from a distance this looked like a swirling, spiralling, sparkling light just above the horizon. Eerie, but not anything from another planet or dimension.

As time passes drones are becoming more and more sophisticated. The software has evolved to the point where drones can now be flown in formation or swarms.

A swarm of drones in formation with lights fitted that fade in and out in unison creates a dramatic effect at night.

If you’re not aware that such a display is taking place and you witness it from a distance you might well be wondering what on earth you’re looking at.

However, this would not explain the mass UFO sightings called the Phoenix Lights in 1997 nor the Belgian UFO wave of sightings from 1989 to 1990.

In addition to the navigation lights previously described, medium and high level aircraft can be quickly identified using flight tracker websites and apps.

Flightradar24.com or Radarbox24.com are two examples. Both enable the tracking in realtime of the vast majority of civilian and commercial flights.

If you have one of these apps on your smartphone you can identify most aircraft in the sky, day or night.

Use the apps or a website to check that the UFO you’re witnessing isn’t a hovering rescue or police helicopter or an airliner making it’s lonely way across the night sky.

Since Sputnik 1 was launched in October 1957 about 8,000 more satellites have been launched into Earth orbit. Some have re-entered the atmosphere and burnt up while 3,000 remain circling the Earth in predictable paths across the skies.

In addition to the satellites there are spent rockets and other space junk, and these two have known flight paths.

Keep watching the skies and let me know in the comments section below if you’ve seen a UFO.