Is Disclosure happening? Is the reality of extraterrestrials being confirmed? 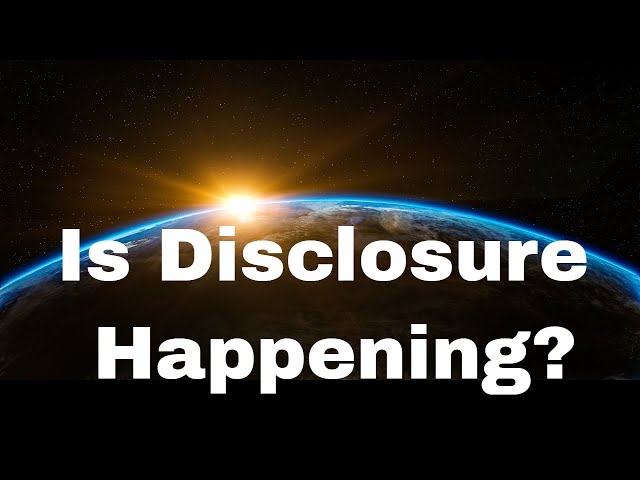 Forty-two years ago I went to see Steven Spielberg’s film, Close Encounters of the Third Kind.  Like many people then and since I was amazed and inspired by that film.

How many people, I wonder, left those cinemas in the 1970s with a renewed sense of wonder, looking up at the night sky (or as little of it as they could see past the light pollution of our towns and cities), wondering if they too would one day have their own close encounters.

If you’ve never seen that film, I recommend you watch it and if you’ve already seen it, watch it again.

The 1970s also saw the growth of the environmental movement and the exploration of alternative forms of sustainable technology.  We protested about the slaughter of whales in our oceans, pollution, nuclear power, and thermonuclear weapons.

As many ufologists are aware, ET craft have shown a keen interest in nuclear weapons and power stations.  According to testimonies collected as part of Dr. Steven Greer’s Disclosure Project, UFOs disabled missile warheads and otherwise interfered with nuclear weapons during the 1950s and the 1960s.

Some say that it was the dropping of atomic weapons on Japan and the testing of such devastating weaponry since, that accelerated the interest of alien races in Earth, and which initiated the sightings that continue to this day.  It is said that we not only posed a grave danger to ourselves and our home planet, but also risked severe damage to the galactic web which connects all things.

In the four decades that have passed much has changed.

The Cold War ended and there are far fewer thermonuclear weapons. The hole in the ozone layer is getting smaller since we stopped releasing CFCs into the atmosphere.  Alternative technology has moved from the fringes to the mainstream, and we know that we must stop using fossil fuels.

The Internet and the world wide web have emerged, and this has not only given us the means to share information quickly and without government control, but it’s also given us a clear example of how a network can connect all things.

The Web, our very own cyberspace, is a reminder of the similarities between ecology, the interconnection of all life on Earth, and the idea that the solar system, galaxy, and the Universe exist in a vast network.

And, just like the butterfly effect here on Earth, so too can our actions have an effect elsewhere in the Universe.

Much progress has been made (much more than the media would have you believe), but much more remains to be done.

Please subscribe to my channel as I’ll be exploring these and related subjects in more videos.

Acknowledgements:
This presentation contains images that were used under a Creative Commons License. Click here to see the full list of images & attributions: https://app.contentsamurai.com/cc/298994

2020-01-19
Previous Post: Missing and Murdered Indigenous Women and Girls
Next Post: Rod Machado’s How To Fly An Airplane Handbook For Private Pilots, PPL