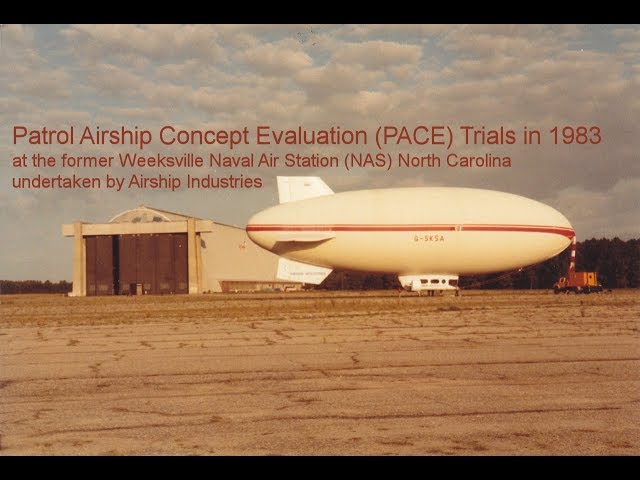 The PACE Trials were a follow up from the joint evaluation of lighter-than-air (LTA) aircraft in 1982 conducted by the USA’s Coast Guard and Department of Defense.

The study undertaken by them was “to determine the feasibility of developing an airship to meet Navy and Coast Guard needs”.

To facilitate things, the US Navy contracted Airship Industries Ltd (AI) in the UK (headed by Roger Munk) for lease of an AI SKS500 airship for evaluation purposes; considered by them to be the same size as the Goodyear Blimp, but with a payload capacity by weight of plus 40% – enabled by vectored thrust arrangements to balance serious all-up weight change without load exchange when hovering.

After all, airships enable long endurance patrol with significant loiter capability to remain over an area of interest (proved in both WWI and II), but need ways to balance aerostatic lift (buoyancy) with weight and/or other means (vertical thrust) when there’s little aerodynamic lift from airspeed.

At the time Luffships.com’s founder Charles Luffman was an aspiring aircraft engineer in his early thirties employed by AI in 1981 to help with general design, engineering and structural analysis to enable a type certificate for the SKS500 airship series (awarded 21 Nov 1984, believed to be the first for an airship).

After completing an urgent task to design and then project manage the development, installation and test of a new better undercarriage needed, he was tasked to facilitate arrangements for the subsequent PACE Trials at Weeksville in 1983.

This led to similar design/engineering and project management work for SKS500-03 modifications desired for a deployable boat below its gondola plus means for crew access and boat recovery with the crew aboard. The task also included installation of a rescue winch above the gondola’s entrance door.

The task involved: various modifications of the deployable boat (an Avon Sea Rider), the SKS500-03’s gondola (for new apertures and reinforcements) and design of necessary winch mounting parts.

He also interacted with the electrical systems’ engineer Tony Pattison, production/assembly teams and airship crew led by Peter Buckley, who also was the test pilot.

Charles project managed the modifications/installations, seeing it all through as one of the trials test engineers with Tony. The boat modifications were undertaken in the UK by Aerospace construction Ltd (Ascon) who also made the winch mounting parts.

Their team, led by Mick Paton, were proficient in boat construction/modification and composite structures. Indeed, Ascon (headed by Jeremy Munk, Roger’s older brother) was a close partner of AI, where they worked together on this and many other projects undertaken by AI.

Charles first went to the USA in 1983, staying in hotel accommodation at nearby Elizabeth City NC with the Ascon team. The short route from there to Weeksville took him past the US Coast Guard Air Base, whose people assisted the programme and acted as observers throughout the trials.

The former Naval Air Station near Weeksville (a village in NC surrounded by fields and woods) is sited next to the Pasquotank river, which flows into the Atlantic Ocean just a few miles away, so was an ideal sparsely populated location for the trials.

Indeed, NAS Weeksville during WWII was an active station with numerous airships housed/deployed from there for coastal patrol duties, which the Coast Guard now serves.

The main thing to look out for was snakes, which sometimes were found curled up in quiet places in the vast dimly lit No 2 airship hangar, used by AI for airship assembly, maintenance and so forth. Charles found one in what Americans call the Rest Room.

Waters from the Pasquotank to the East USA NC coastline are protected by the Outer Banks, a sandy strip of land with dunes that the Wright Brothers flew from.

This was a great place to go for relaxation and sailing on the calm warm shallow inland waters – also fishing, crabbing and clams, specialities of the region.

It all went reasonably well, so the airship was soon off (launched) for a boat deployment test onto the

2019-01-11
Previous Post: LuffShips – LTA Solutions – Lighter-than-air Technology. Airship Design. Aerostats, Balloons
Next Post: How to see a UFO. how to identify a UFO, and what to do when you spot a UFO